I met Mr. Right on labor day weekend in Panama City Beach in 1998. I went through a couple Mr. Wrongs to get to him, and he didn’t appear to be Mr. Right at the time, but the Lord works in mysterious ways.  We dated for 5 years before we got married and today is our 9th wedding anniversary. Wow. We have lived a lot of life together in 14 years, but I am more in love with him today than when I said, “I do”.

He is so right for me.

I call him Mr. Right for a few reasons. He’s right for me, right for our family, and well-most of the time he’s just plain right. As in correct. Now before you accuse me of being brainwashed, let me explain. I’ve been around women who enjoy making fun of their husbands faults, but the truth is I kind of dig my husband. Respect is probably a better word.

I’m fortunate to know some good men- but there is no other man I respect more than Mr. Right. He is smart, funny, devoted, affectionate, beautiful and wise. He has the gift of discernment and can most often offer the best advice. I’m serious. I ask his opinion first, and then after polling a few family members and friends, it usually turns out that he was right all along. I don’t know how many times I’ve told him, “Well so-and-so said I should do this-and-that..” And he’ll interrupt, “Didn’t I tell you that?” Um. yep. He’s amazingly good at sorting through my befuddled thoughts and helping me arrive at a decision. Accurate and Decisive.  Now here is where I could point out his flaws (after all I am married to him and he has a couple), OR I could thank God for blessing me with someone who can keep a level head and make a good decision. (An excellent quality to be married to if, like me, you get anxiety ordering at a restaurant for fear of making a bad choice.)

Now I’d like to think that God has also blessed him with me so he could learn a thing or two- like being a little more sensitive in certain situations. Do not. I repeat. DO NOT come to my husband for sympathy or coddling of any kind. Do, however, come to him if you want a straight answer. I cringingly recall being at a dinner party when the hostess, noticing an appetizer she made on his plate asked if he liked it. His response? “Well, I didn’t  spit it out.” I was mortified. Who says that?!  Don’t ask if you don’t want to know. I’ve learned this the hard way.  (I come from the If-you-can’t-say-anything-nice-make-something-up Family) His matter-of-factness is attractive, endearing and to be honest-I’m jelous. Mr. Right will tell you the truth according to him and it usually is The Truth.

So we are opposites. No really- we actually paid for that bit of information. After struggling with our differences earlier in our marriage we went to counseling and discovered that according to the Myers-Briggs personality test we are polar opposites. (He is an ISTP and I’m an ENFJ in case you were wondering) What does this mean? Well, our counselor said that although our personality types naturally seek each other out, our relationship would always require a lot of work. Work. It was more enlightening than discouraging. This has been the best job I’ve ever had.

So when Mr. Right says something that is the complete opposite of what I was thinking, I just roll my eyes and hope that Answer to Prayer turns out just like him. And when I witness him being brutally honest, I shake my head and pray for Blessing and Gift to be blessed with husbands just like him. I appreciate our differences now. We keep each other balanced, and neither of us hope the other will change. 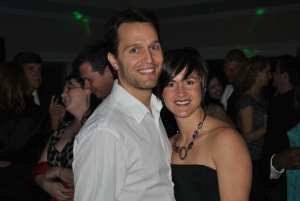 So I’m okay if he’s right most of the time. I’m okay with it because he has no ulterior motive. He makes me feel important, beautiful, treasured. He loves me like Christ loves the church, and it’s because of that I pray that I am everything he needs in a wife. And I work to be everything he wants. Not because I want him to love me, but because he loves me.

He is so right for me.

So Happy Anniversary Mr Right. You’re the best decision I’ve ever made. And even when its work, I will always clock-in…as long as we both shall live.